First off, showers are seemingly the greatest place to conduct thoughts. It’s as though your thoughts, apparently electric, conduct the water in a brainstorm above your head.

Anyway, the point of this post is to address what I think is at the heart of contention in the religious sphere of our society: authenticity. What I mean by this, is that currently in the United States (and really, the world over), there is deeply rooted sentiment that there is “one true religion.” Essentially, that, every religion thinks that all other religions got it wrong; the God, the principles, how to pray, what is right about marriage, and how to treat someone that is different than you. Then, there is the atheist’s stance, which I think was nicely displayed in a meme on Facebook the other day, so rather than typing one thousand words, here you are: 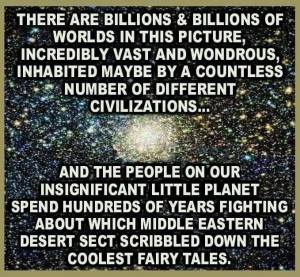 Which, at the time of sharing it, I liked it. I liked it, but I didn’t love it – because, as you can see, subtlety, the atheist is taking his piece of the pie. There is condescension in the post. The words, “insignificant, little, fighting, scribbled, coolest,” and the phrases, “Middle Eastern desert sect,” and “fairy tales,” are all designated words to captivate the selective crowd (atheists) in an echo chamber of superiority. Recognize that the atheist’s failure here is the same as the devout religious person’s failure, which is attempting to claim a truth higher than their truth. These are attempts at desperate self-righteousness, in all their humor.

Ultimately, however, we might find that, for the religious person, rather than the Judeo-Christian God being the only one in Heaven (because this is the current mode of thought in the United States), maybe Heaven is a big enough place to accompany all of the Gods of all of the religions, the world over. And the takeaway point for the atheist here, is that at the very least, what we can recognize from religion and ourselves is that scrambling to be correct about something, especially one of such an abstract degree (and in all fairness, even multiple universes can’t outright deny the potential existence of a place such as Heaven, and actually probably promotes it) is worthless except for attempting to pursue a greater condition or moral value in the world. Therefore, maybe we should all recognize that every religion or religion-less person has a way of identifying their spirituality or relation to the world and be okay with the fact that we all do so differently.