Today, I drove to Great Brook Farm State Park. I have been since the fall just to take a walk, grab a coffee afterward, and write. As I was driving, I thought about topics I could write about, as I normally do. I thought about David Foster Wallace’s sentiments on worship:

“The only choice we get is what to worship. And an outstanding reason for choosing some sort of God or spiritual-type thing to worship — be it J.C. or Allah, be it Yahweh or the Wiccan mother-goddess or the Four Noble Truths or some infrangible set of ethical principles — is that pretty much anything else you worship will eat you alive. If you worship money and things — if they are where you tap real meaning in life — then you will never have enough. Never feel you have enough. It’s the truth. Worship your own body and beauty and sexual allure and you will always feel ugly, and when time and age start showing, you will die a million deaths before they finally plant you. On one level, we all know this stuff already — it’s been codified as myths, proverbs, clichés, bromides, epigrams, parables: the skeleton of every great story. The trick is keeping the truth up-front in daily consciousness. Worship power — you will feel weak and afraid, and you will need ever more power over others to keep the fear at bay. Worship your intellect, being seen as smart — you will end up feeling stupid, a fraud, always on the verge of being found out.” – David Foster Wallace (This is Water)

Which immediately made me think about John Rochester’s remarks on thinking beyond what is directly in front of us is “thinking like an ass,”:

“But thoughts are given for action’s government;
Where action ceases, thought’s impertinent:
Our sphere of action is life’s happiness,
And he that thinks beyond, thinks like an ass.”

which is the importance of being present (not thinking like an ass). Also, this is what I think David Foster Wallace meant when he said, “The trick is keeping the truth upfront in daily consciousness,” as he later indicates that one of the hardest things to do is to always beware of the most obvious realities in our life and how hard it really is to do.

Then, I thought about Walter Pater’s thoughts in his Conclusion to the Renaissance on success in life,

“To burn always with this hard gem-like flame, to maintain this ecstasy, is success in life. Failure is to form habits; for habit is relative to a stereotyped world; meantime it is only the roughness of the eye that makes any two persons, things, situations, seem alike.”

I parked my car, got out, and began the trek. I looked at the fluffy, freezing snow covering the ground and thought about the pros and cons of the walk. My boots and socks would be wet and uncomfortable. However, I’d be energized and introspective during the walk and that’d carry over while sipping coffee at the local cafe. I was planning on writing and I needed the energy and introspection, so the pros outweighed the cons. I began walking and admiring how the sun danced and illuminated miniature diamond mirrors on the snow-laden path. I listened closely to the chickens peeping in their roost and the calm crinkling of snow beneath my feet. Up ahead, I saw two women cross country skiing, “What geniuses…” I thought. Then, I saw another guy skiing around a bend that was perfectly groomed so that you could see as much nature and have the best route around the State Park as possible. I thought of how ridiculous I must have looked walking around while everybody was skiing. I couldn’t believe how everybody had the same idea — to come here and cross country ski during the winter. I’d never skied before but the idea of it now seemed greater than ever. Why walk? Skiing was a faster mode of travel and it allowed you to see the trails with such a different perspective. All of my thinking about the sounds, sights, and prospect of skiing was abruptly interrupted when a skier fell in front of me.

“You distracted me! I’m blaming you…” she said.
Still caught up in thought about how bright everybody was for skiing, I laughed, “You guys are geniuses for skiing!” referring to her and her mother.

I kept walking and noticed off into the distance a male skier sort of hovering around and constantly looking at me (or so I thought). Unsure why or what he would be doing, I dismissed the thought. Suddenly, though, he stopped on the trail ahead of me. Just stopped and stared directly at me. I again diverted the thought and instead figured he might be waiting for somebody. I kept walking and veered toward the side of the path and as I approached him I greeted.

“Hello,” I said.
“Look, I just have to let you know that you can’t be walking on these trails. These are skiing trails only,” the skier said. “You know, he pays money, this park is a State-run, State-funded park. He pays money to groom the trails and I pay money for a season long pass,” he continued. He went on about how I shouldn’t be on the trails and if I want to ski or snowshoe there is a rental center.

I apologized, thanked him, and asked the quickest way back. I felt stupid. We talked for a moment about the cost of skiing and my obliviousness. I walked on the unpaved portion of powdery snow back to my car. Upon reaching the parking lot, I saw a yellow and black caution sign, “GROOMED SKI TRAILS. CLOSED TO WALKING” 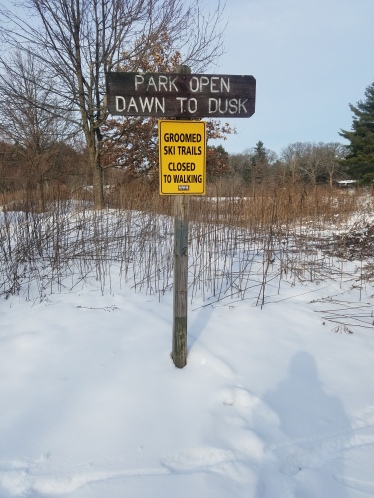 Then another… and another… three signs. Three signs were directly in front of me as I drove in that I completely missed while caught up in all of the abstract thought about presence and the importance of obvious realities by David Foster Wallace, John Rochester, and Walter Pater. Ironic. 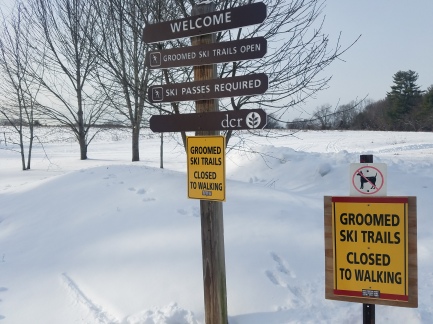